Paula Foet was born in 1927 in Vlaardingen, near Rotterdam, in the Netherlands. The eldest of a family of eight, she grew up during World War II. During the war, Paula took care of her younger sisters and brothers and helped her father in his convenience store. 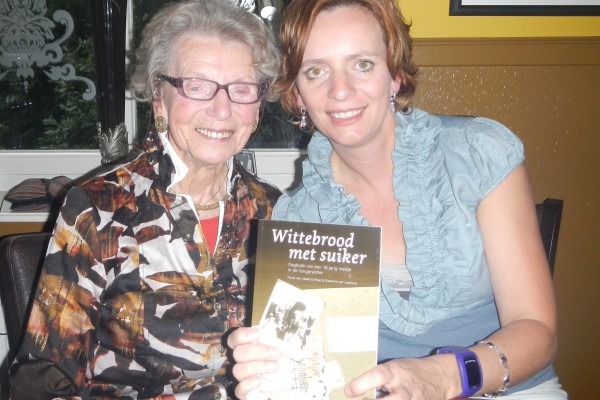 Paula and Susanne during book signing in 2012.

Towards the end of the war, the people in Vlaardingen suffered tremendously from shelling and hunger. Paula witnessed people’s pain. Yet, she remained grateful for what they had, and thankful to be able to help others. Paula captured her daily worries and war stories between 1944 and 1945  in a diary, published under the title White Bread with Sugar in 2012.

Our mother Paula married in 1957 with Sjef van Lieshout, and they had six children. They moved to Dongen, a small town in the south of Netherlands. Despite her very busy family life, Paula cared immensely for other people. In her own inner circles, and also far away. Through her voluntary work, donation programs and mission trips, she explored the world and tried to make it a better place.

Paula was awarded the Honorary Citizen’s award of Dongen. In 1999, Paula became a member of the Order of Oranje-Nassau, and she received a medal from Queen Beatrix.

Paula van Lieshout-Foet died peacefully in 2013 at 85 years old. She had always wanted to reach the age of 85.

Paula’s Medal in the Order of Oranje Nassau